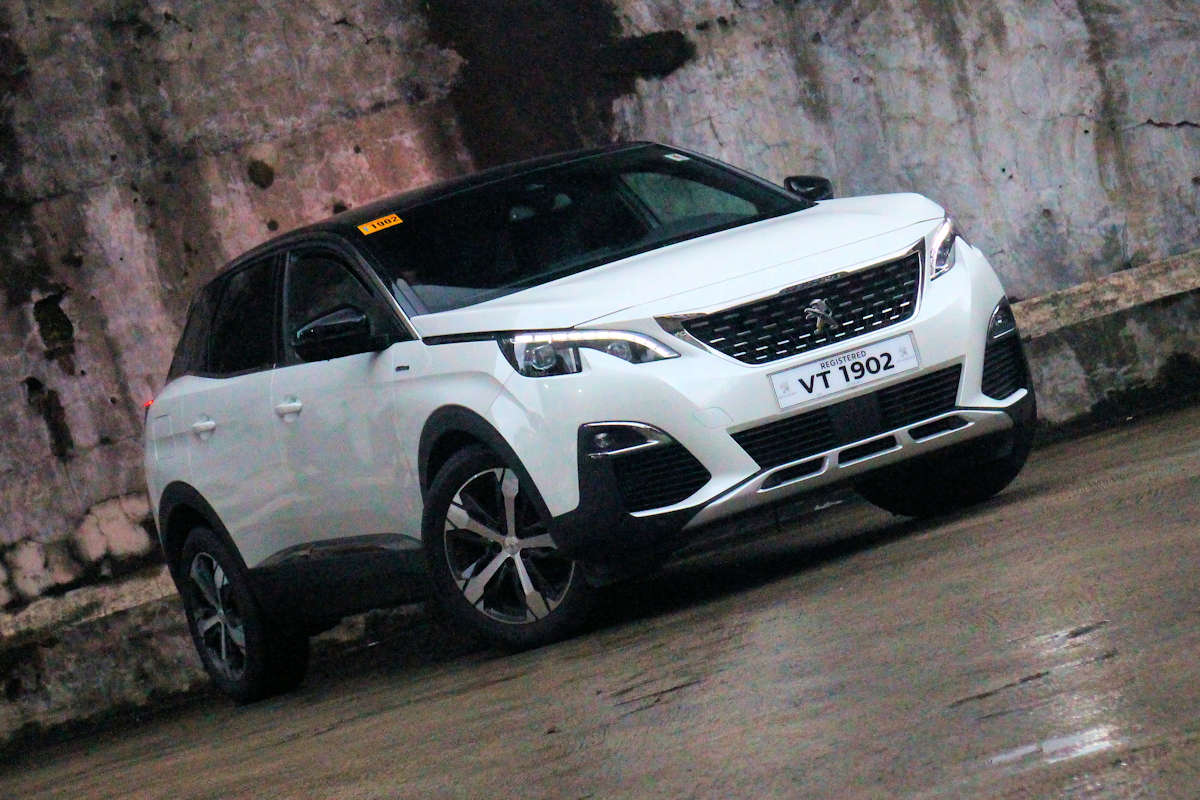 Peugeot is now singing a different tune. After trying to go against the likes of Subaru and Mazda, they’re now going upmarket; basically, filling the white space between mainstream and premium brands—a gap left wide open with Volkswagen’s decision to go south with their pricing. It’s a ballsy move for sure, but one that suits the unconventional French brand. Leading the charge is the Peugeot 3008—the 2017 European Car of the Year and one of the finest compact crossovers of any price point available today.

Outside, the 3008 is a visual tour-de-force. While the general silhouette is typical crossover—boxy and hunkered, the details set this apart from the competition. The striking LED headlights, jewel-like grille, and large intakes convey a sense of individuality lacking even in some of Germany’s best efforts. The high-gloss “Black Diamond” roof, sandwiched by chrome strips, emphasize the 3008’s lowered roofline while the complex two-tone 18-inch alloy wheels add visual luxury to its true-SUV ground clearance of 219 millimeters. 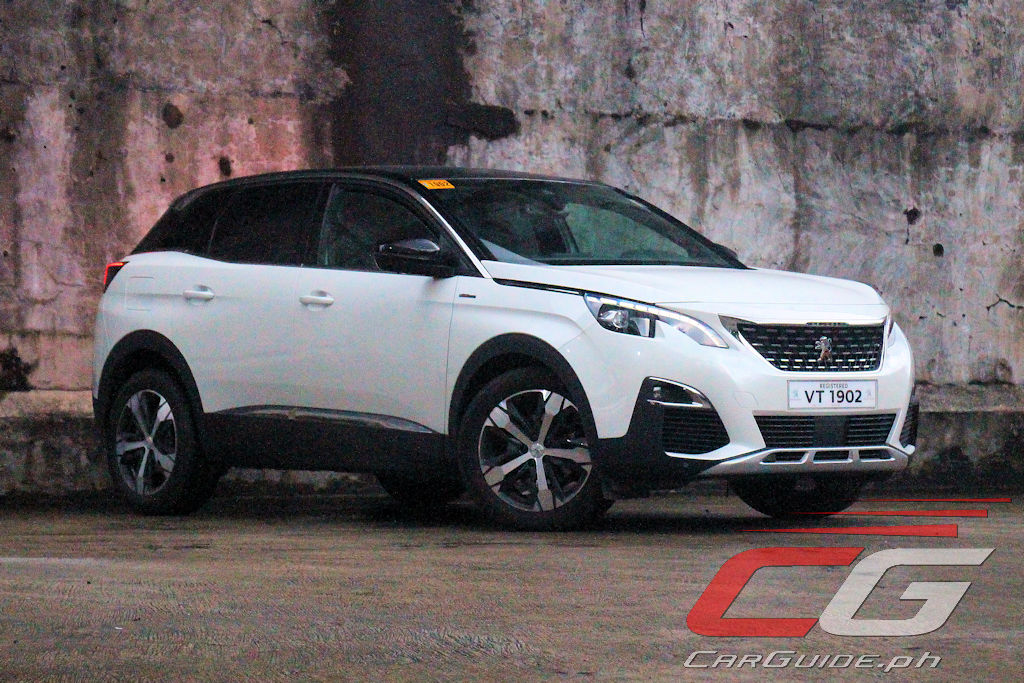 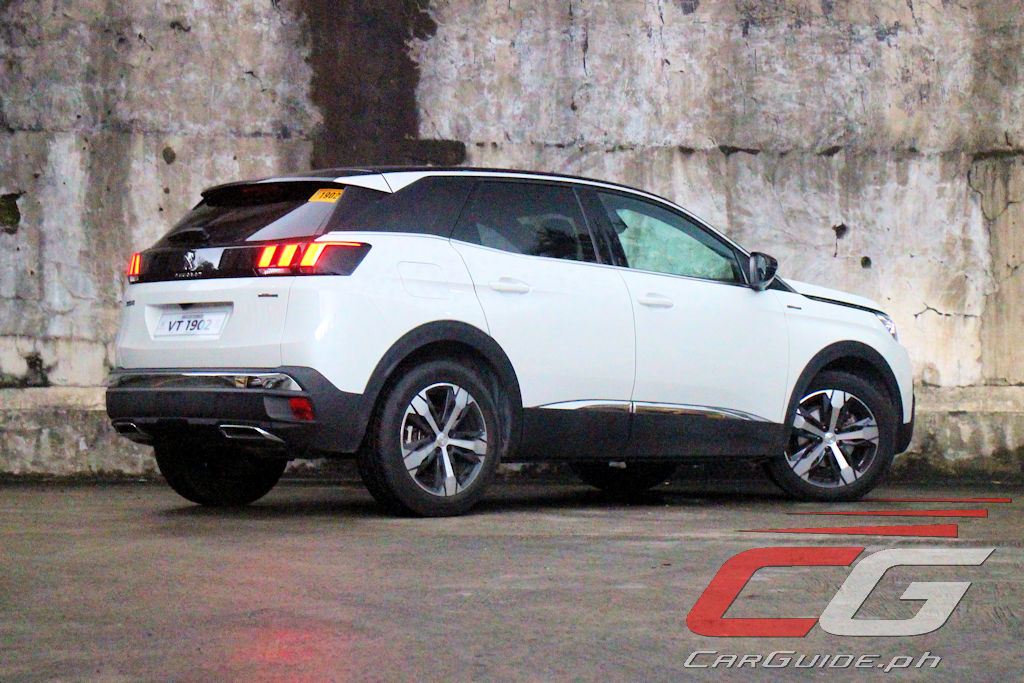 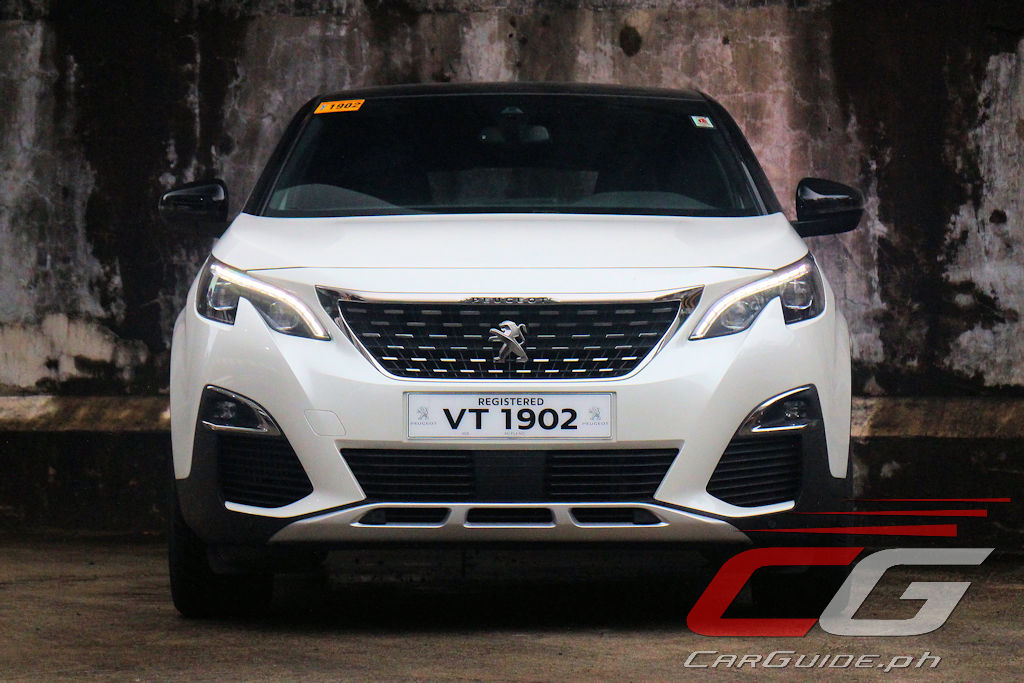 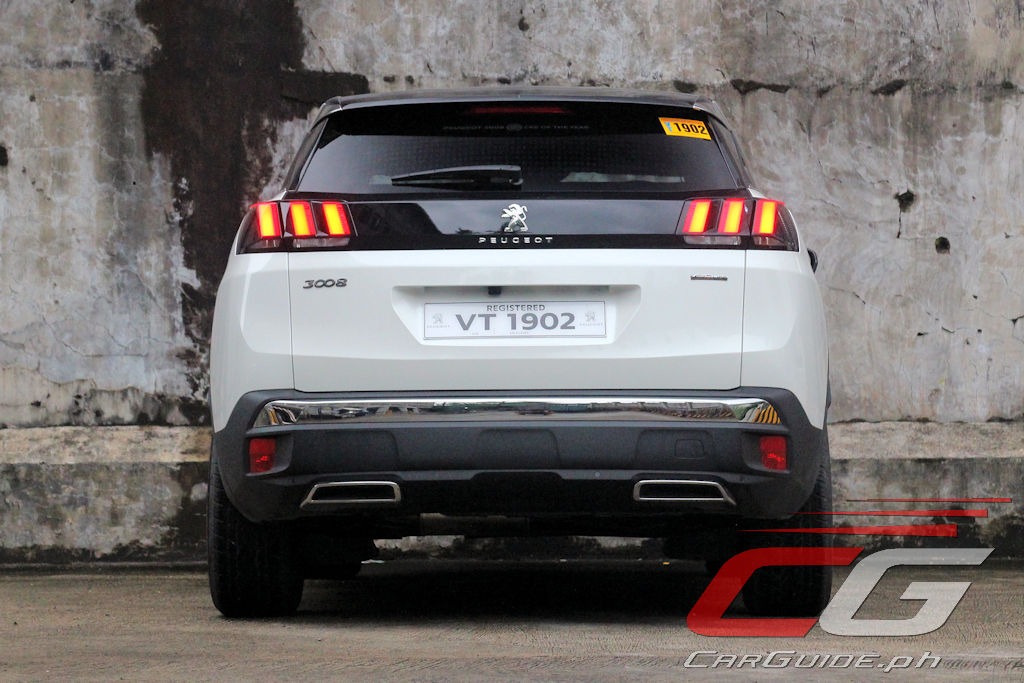 The 3008’s visual flair continues inside with a cabin that’s more concept car than production automobile. It sports what Peugeot calls “i-Cockpit”, a driver-centric design with a small diameter steering wheel (with a flat top and bottom) and gauges that are placed above, not behind, it. Apart from being a feast to the eyes, it’s also quite lovely to touch. Unique cloth inserts are placed on the doors and dash—cutting the somber all-black interior; the material richness and perceived quality are also top-notch.

European crossovers aren’t necessarily known for their interior space, but the 3008 manages to buck that trend. There’s generous amount of space all around—felt at the front with the increased couple distance and at the back with more leg- and headroom than before. The low rear center tunnel and raised location of the air vents make sitting three abreast a genuine possibility. Cargo room though still isn’t stellar. In terms of volumetric numbers, it’s at par with other crossovers (520 liters), but the shape of the space itself is more vertical than horizontal. Oh, and the tonneau cover is flimsy too. 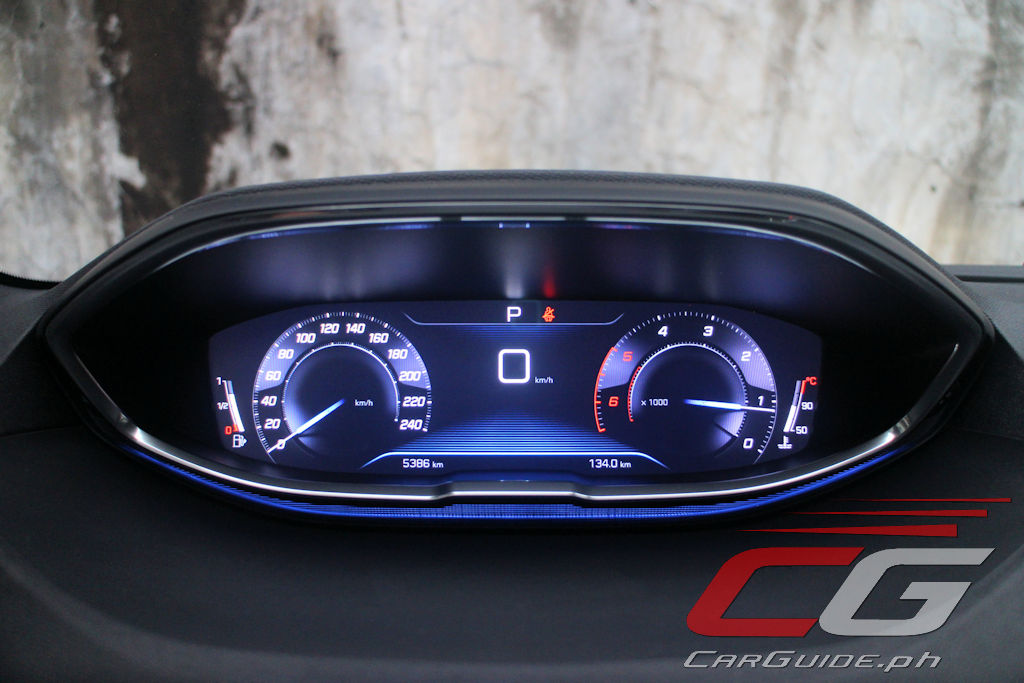 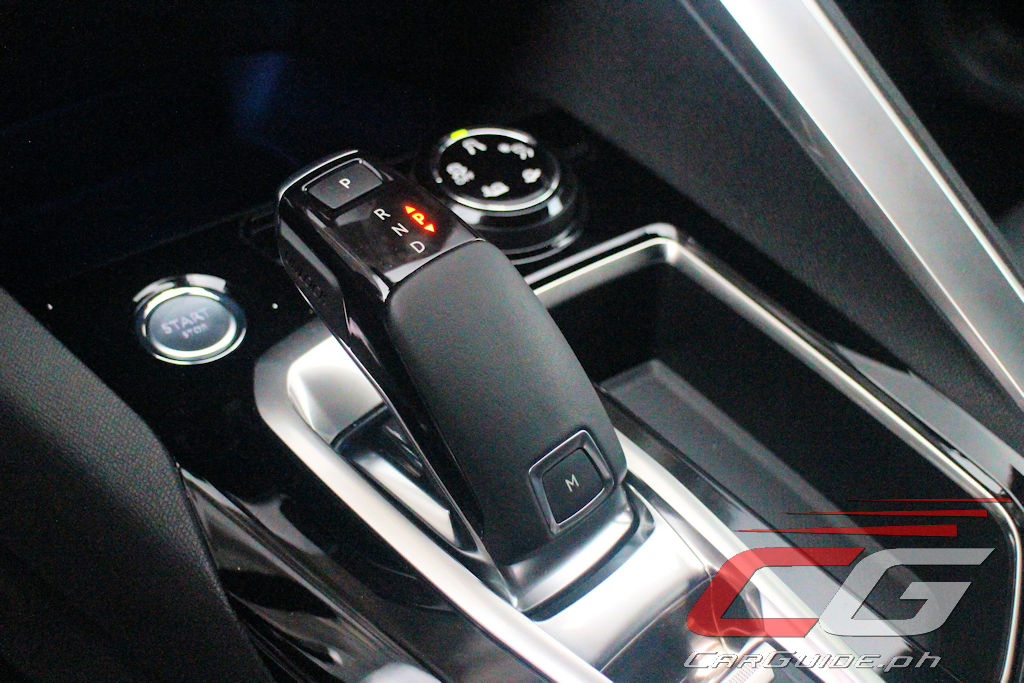 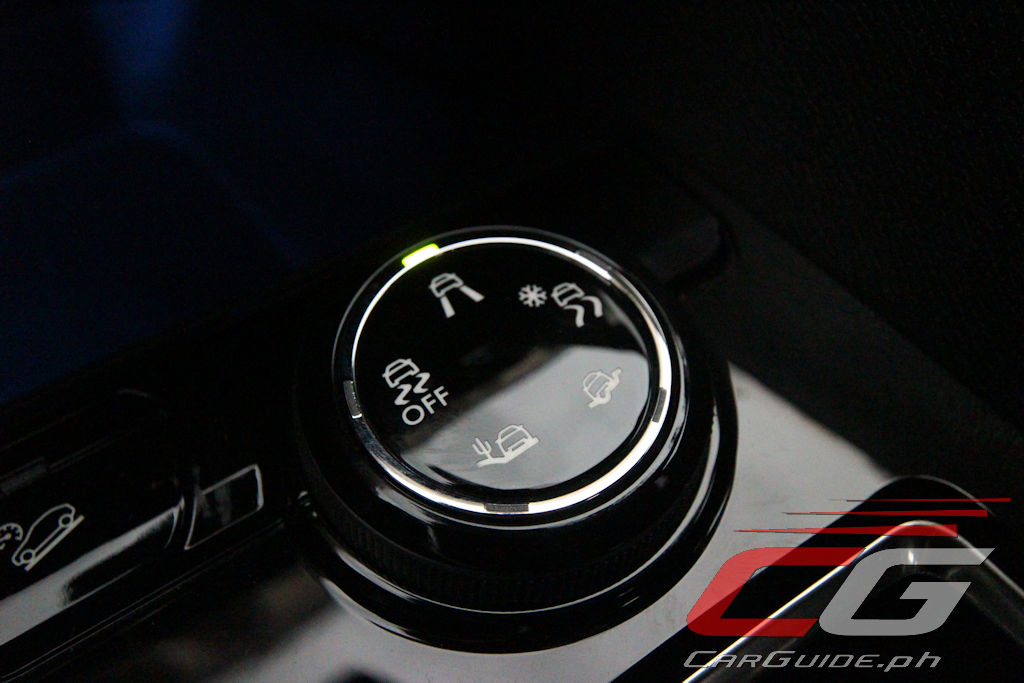 Coming from far more conventional choices—both European or Japanese, getting used to driving the 3008 requires some time. It’s gimmicky (it has a changeable cabin ambience called i-Cockpit Amplify that includes a multipoint massager in the seats and a fragrance diffuser in the AC), but at least it remains grounded on solid ergonomics. The seats are firm and supportive, while the steering wheel is rewarding to those who hold them in the proper 9-3 position. The high seating rewards with a commanding view of the road, but visibility is mixed because of the thick A-pillar and small rear glass. This GT Line trim is supposed to have blind spot indicators (as indicated by the icons on the side mirrors), but the switch to turn them are nowhere to be found. Front and rear proximity sensors are standard as is a rear-view camera. The last one is nifty because it switches from the conventional to a top-down view whenever the sensors are tripped indicating a possible object; it’s perfect for parking with millimeter precision.

Compared to other preview i-Cockpit executions, the 3008 has physical piano key-style shortcut switches. This means less fiddling around with the touchscreen in general, though some basic commands (changing of temperature, audio sources, dialing phone numbers) still require some intimacy with the 8-inch display. The most frustrating thing about the 3008’s ergonomics though is the brake pedal. Though it’s placed well in the footwell, it’s angled so weirdly that anyone with large feet (I’m size 11) will hit the vertical part of the pedal itself—and this is despite settling on a seating position that’s farther than usual. 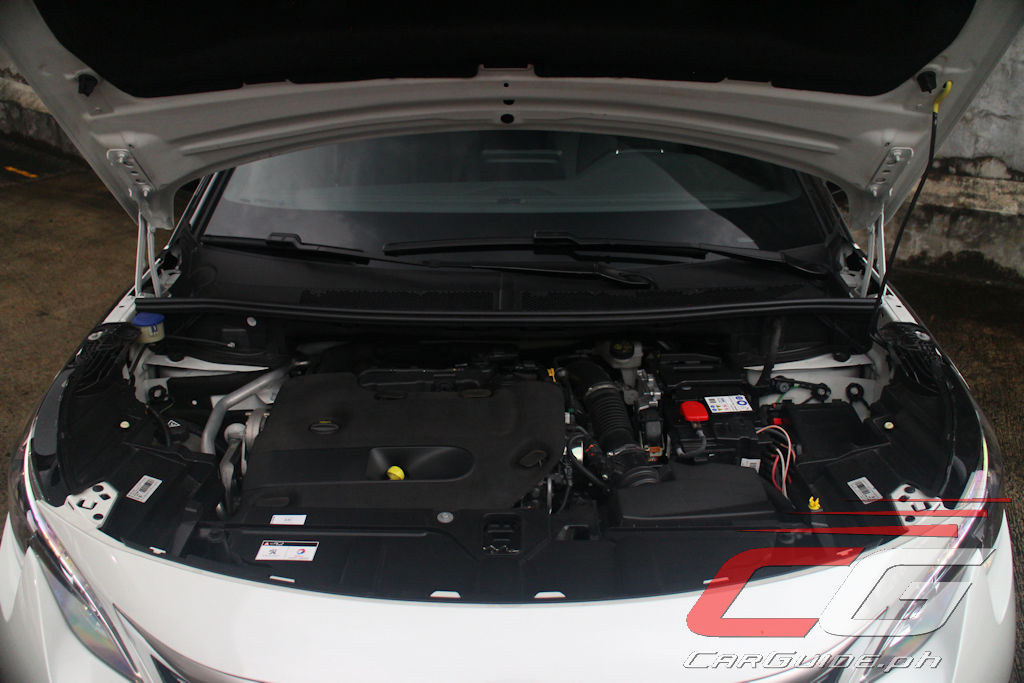 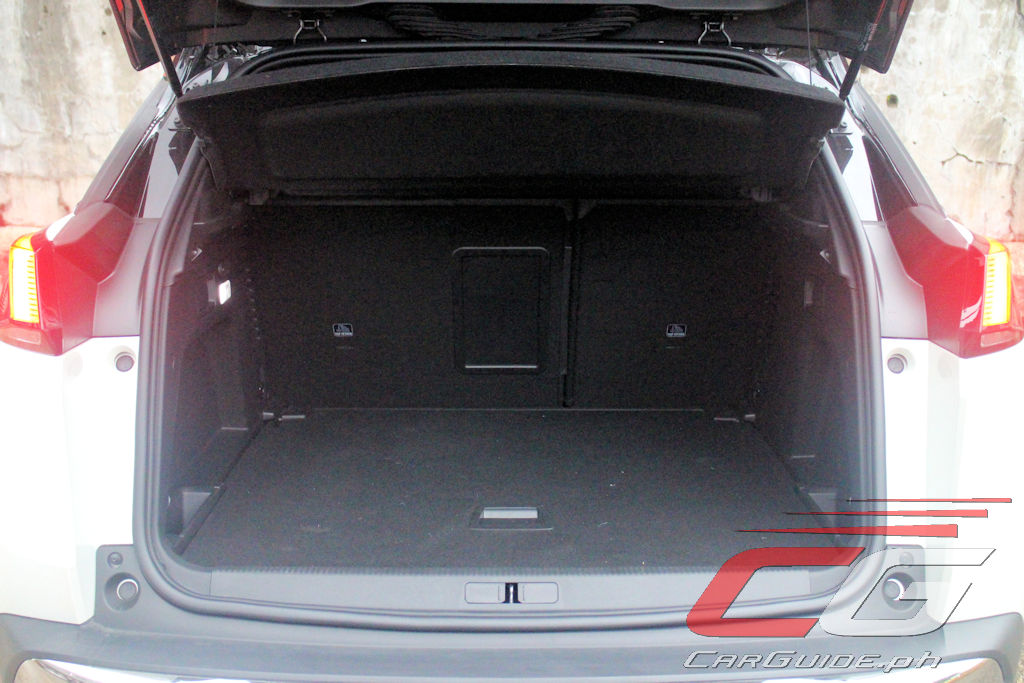 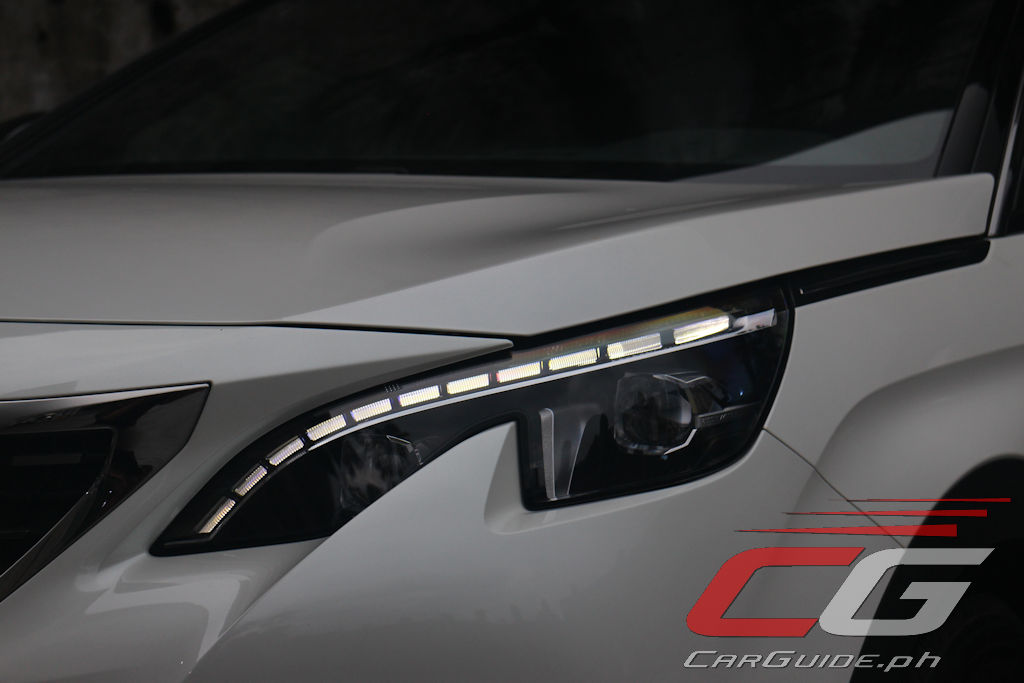 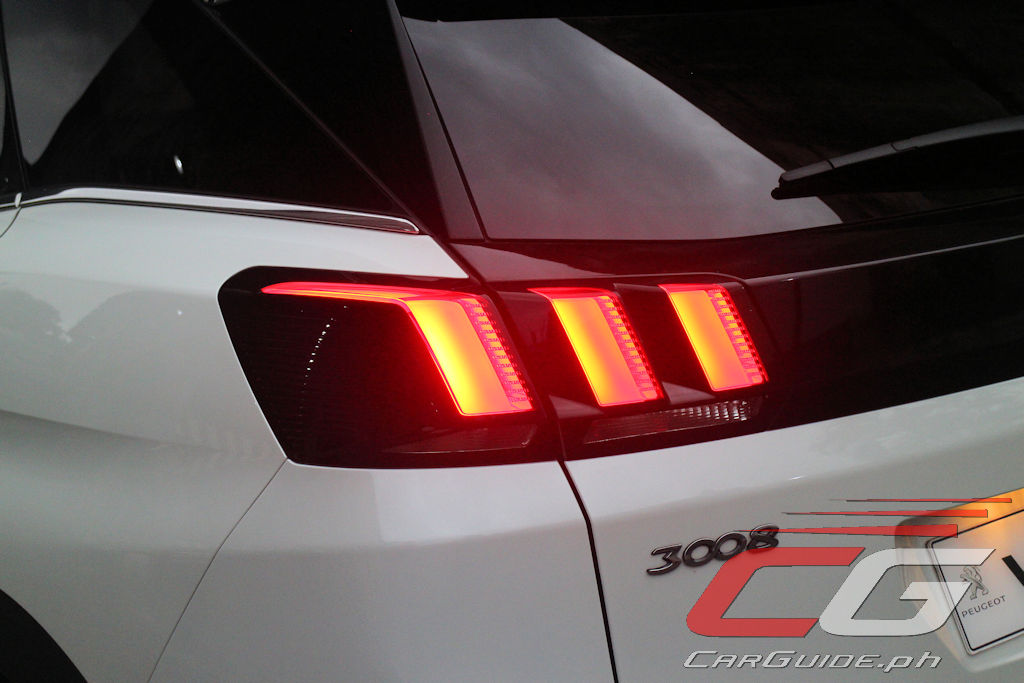 The oddly-positioned brake pedal aside, the other aspects of the 3008’s driving experience remains positive. The steering is weighty and intuitive. However, the small diameter wheel requires more precision to dial down its nervousness at high speed. The ride itself is balanced, quelling both body roll and potholes in equal measure. That said, larger jolts can shake the cabin and can jostle the passengers over undulating surfaces. Still, for all these minor issues, it’s mighty quiet and refined—perhaps a better all-rounder than a German crossover twice its price.

With the 3008, Peugeot has eschewed any kind of all-wheel drive system in favor of a clever side-to-side torque-transferring front-wheel drive system dubbed Advanced Grip Control. In theory, it’s supposed to replace traditional all-wheel drive systems by optimizing traction based on the terrain: Normal, Snow, Mud, Sand, and ESP Off. In reality though, no software system could correct the 3008’s propensity to break traction, even for a brief moment, during full throttle jabs with a bit of steering angle dialed in. 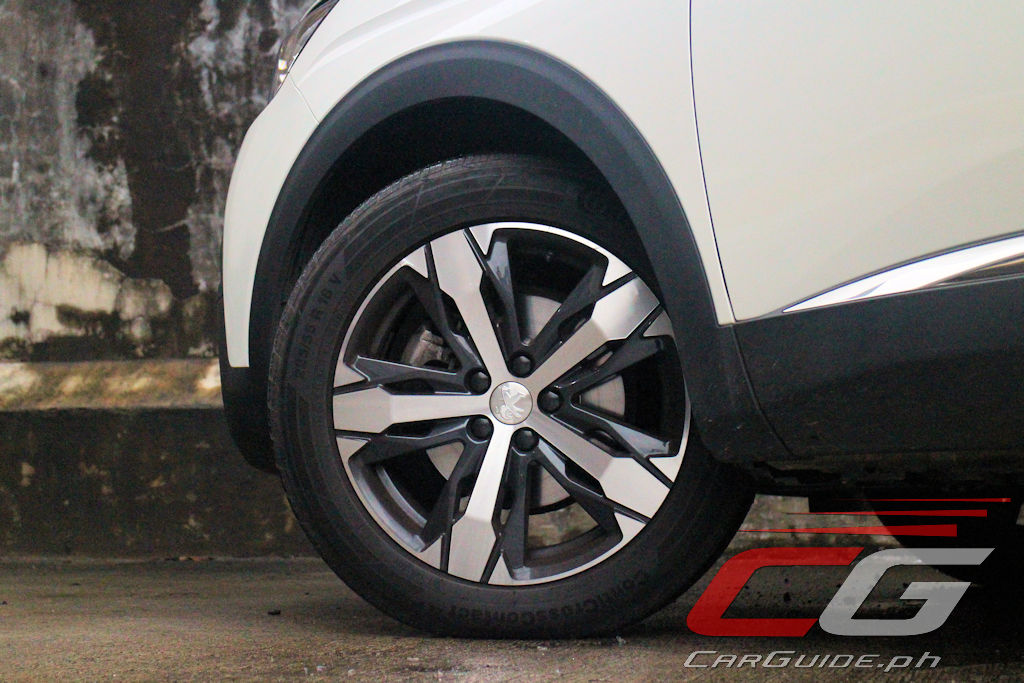 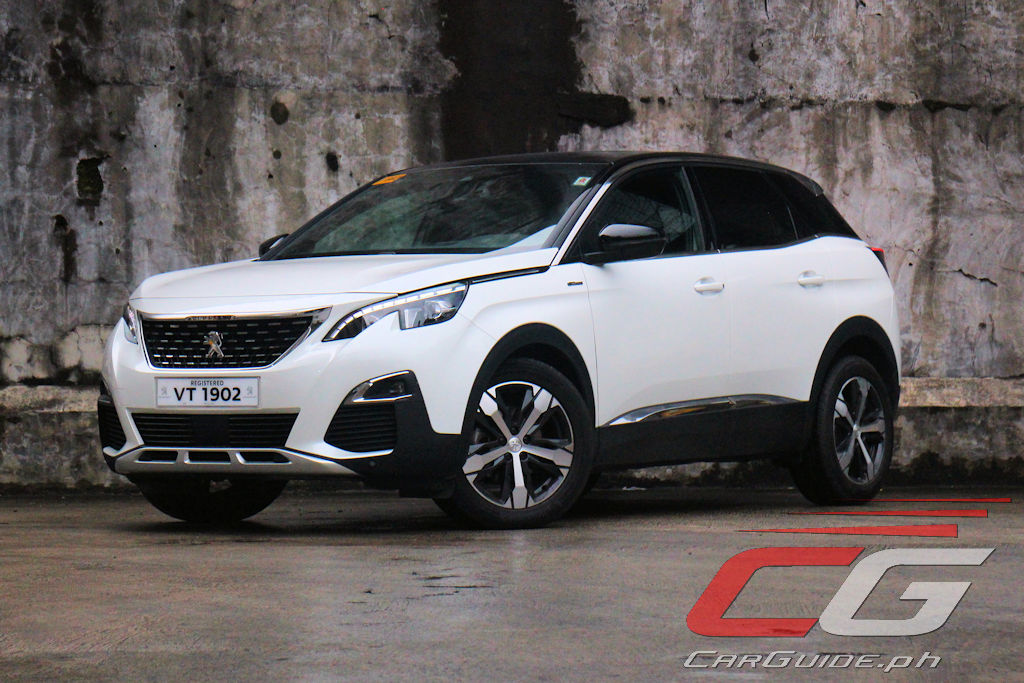 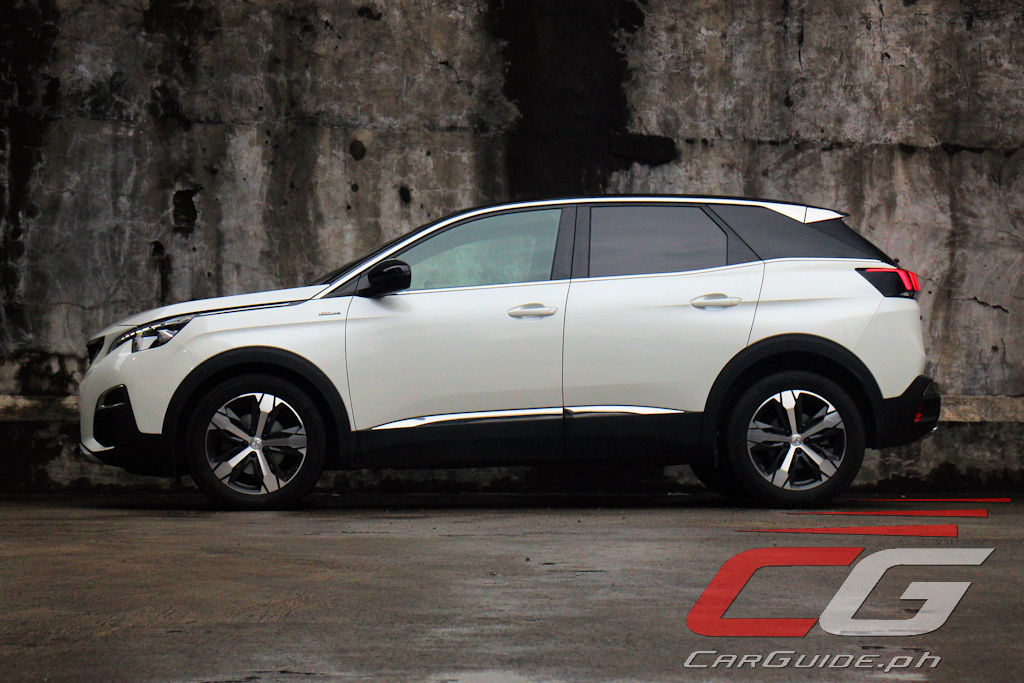 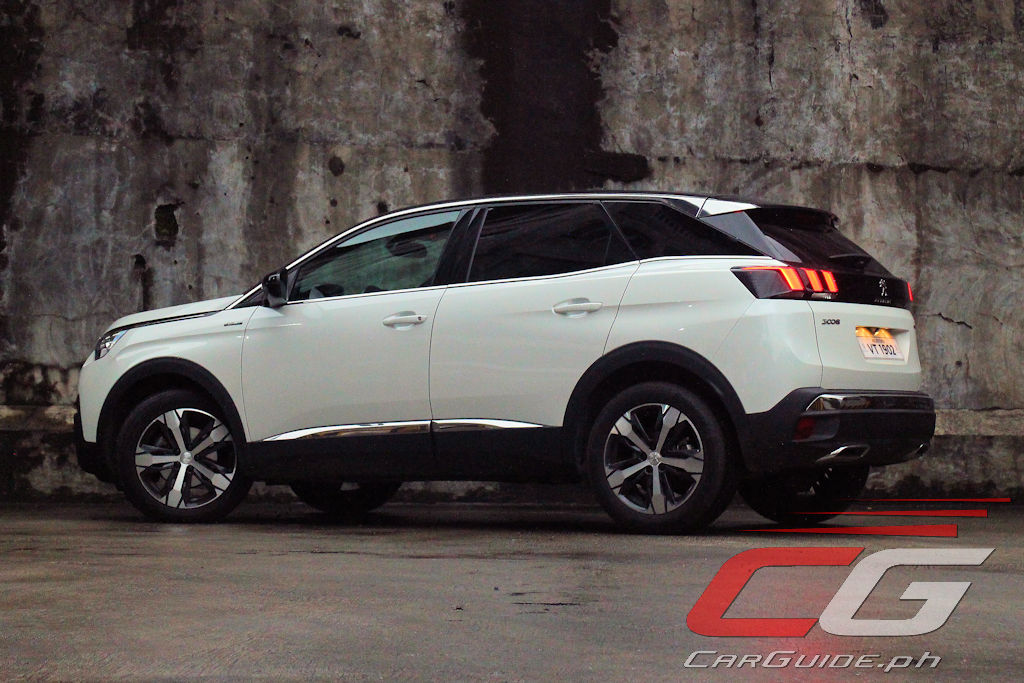 With no bulky all-wheel drive system, the 3008 has curb weight in its favor: at 1,465 kilograms, it weighs less than both the all-wheel drive-equipped Forester and CX-5, which top out at 1,518 and 1,626 kilograms respectively.

This maximizes the performance of its 2.0-liter turbodiesel engine. Making 150 horsepower and, more importantly, 370 Nm of torque, it’s swift and flexible. The engine responds with gusto, but not before showing some hesitancy at low revs first. However, by the time peak torque kicks in (2,000 rpm), it pulls stoutly and cleanly, making any overtaking or hill climbing an easy task. The 6-speed automatic is just as lazy at low speeds. It’s clearly tuned for fuel economy (quick to upshift, slow to downshift), but at least there’s a Sport mode to correct that. Still, 14.28 km/L in the city (average speed: 18 km/h) is downright stupendous. 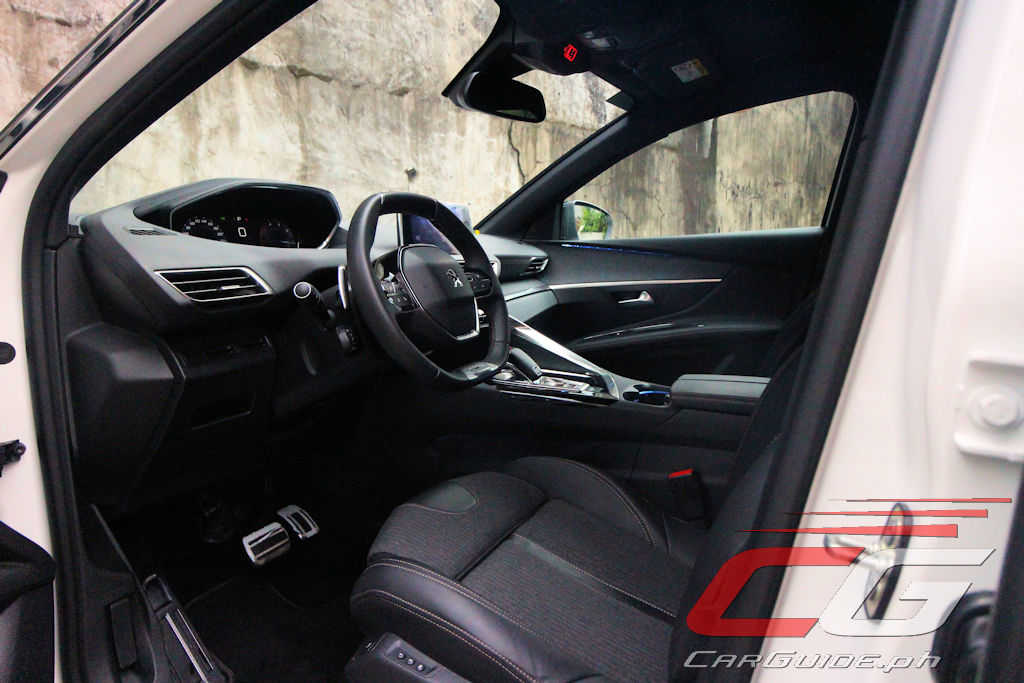 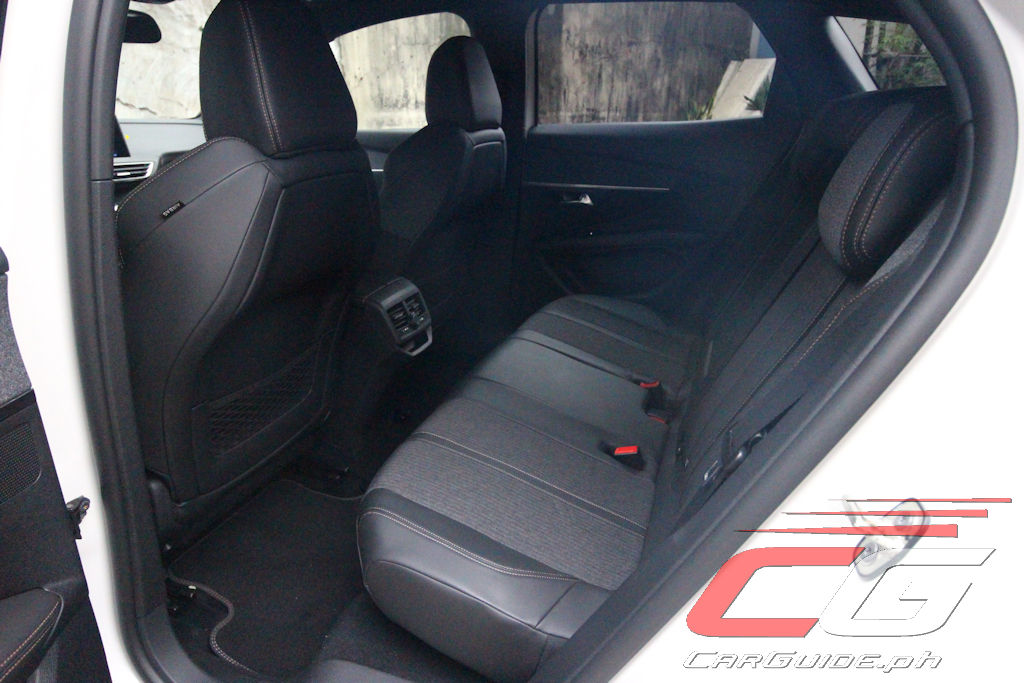 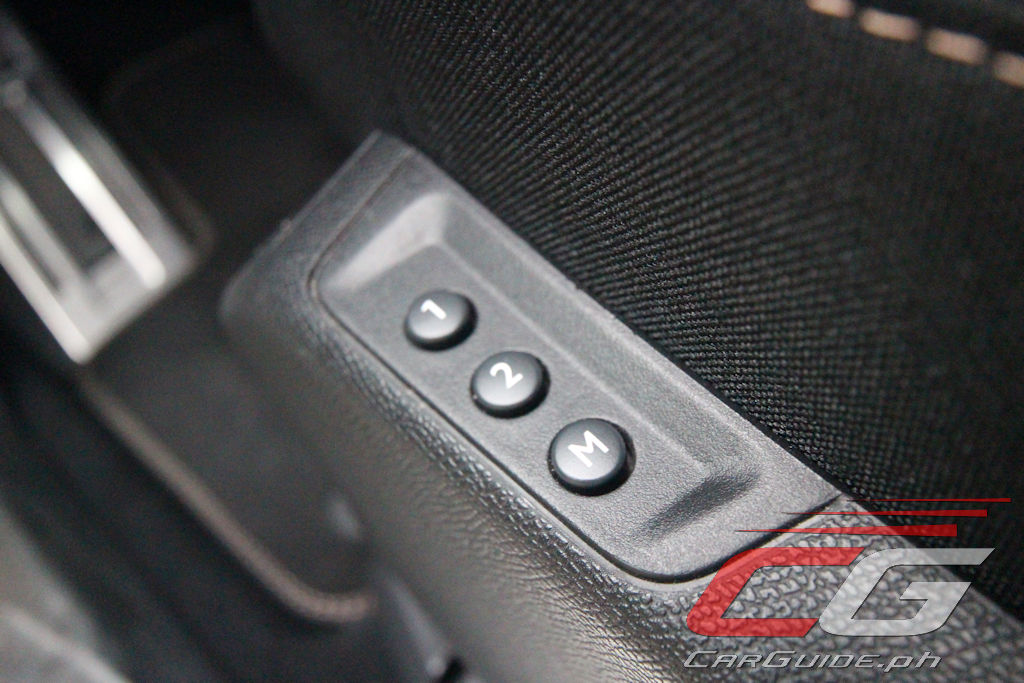 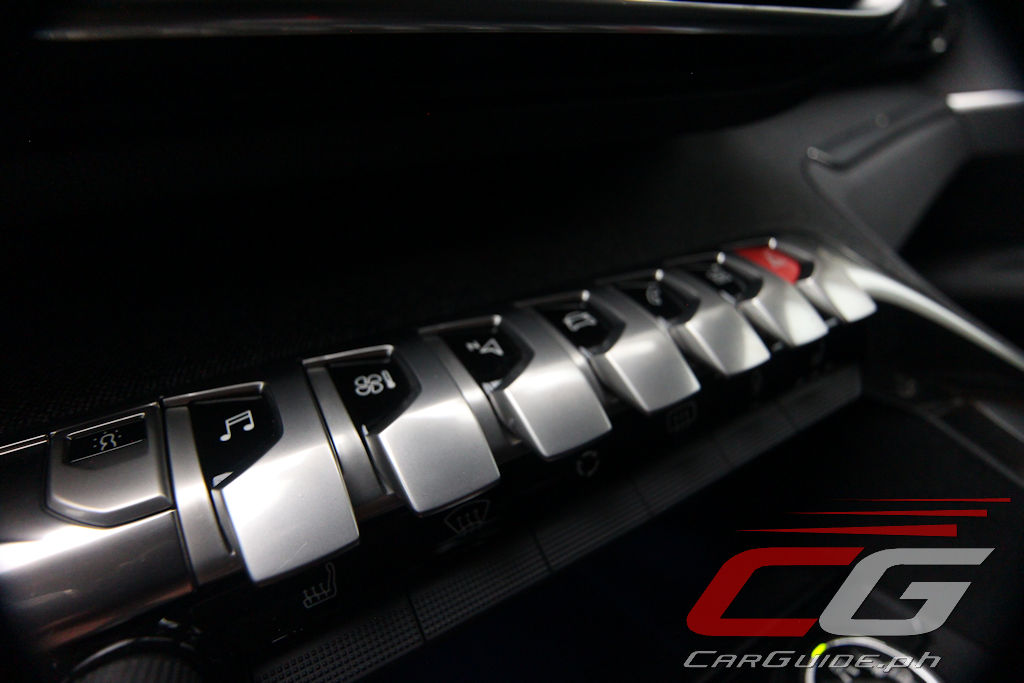 Priced at P 2,790,000 (you can opt for the 1.6 petrol at P 200,000 less), the 3008 GT Line offers plenty of kit for the money. The Lion Crest may not command the same level of brand recognition or panache as a Mercedes-Benz or BMW just yet, but if this 3008 is any indication, they’re already on their way. In the end, the 3008 harks back to Peugeot’s long-dormant strengths. It brings a certain boldness into the compact crossover segment thanks to its standout style and excellent fit and finish. Not only is it well-attuned to the demands of a style-conscious and aspirational market, it’s a felicitous vehicle to mark Peugeot’s journey upmarket. 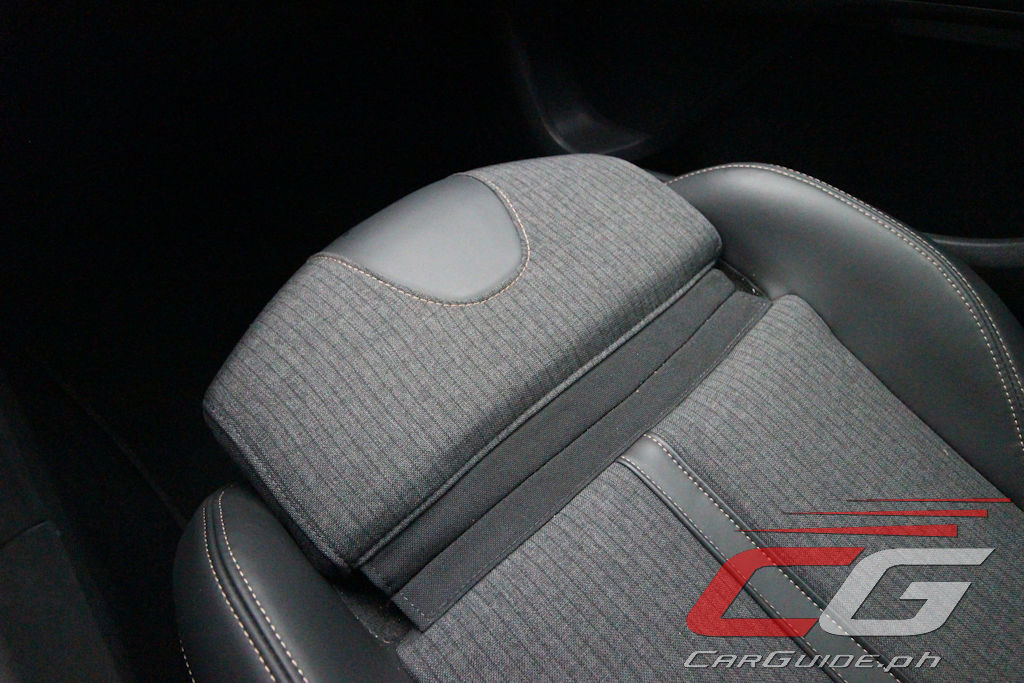 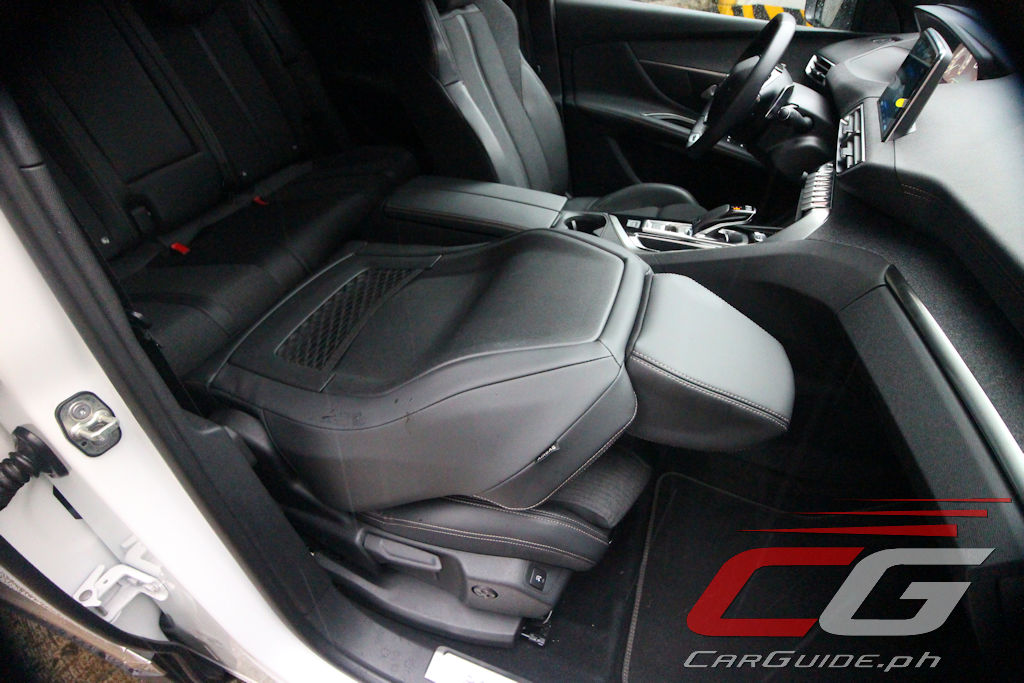 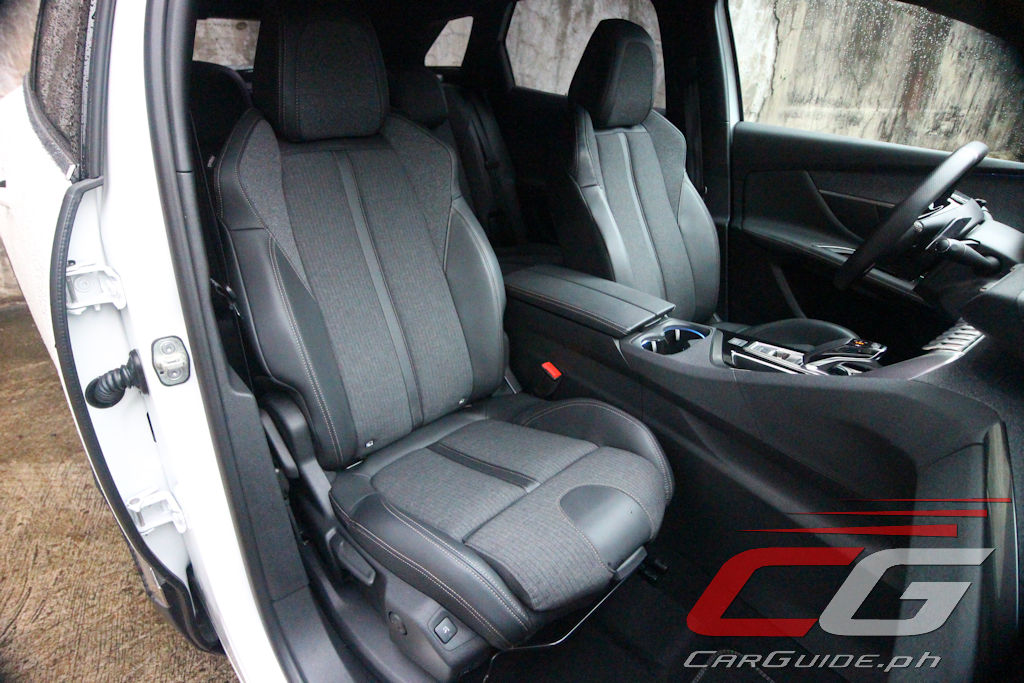 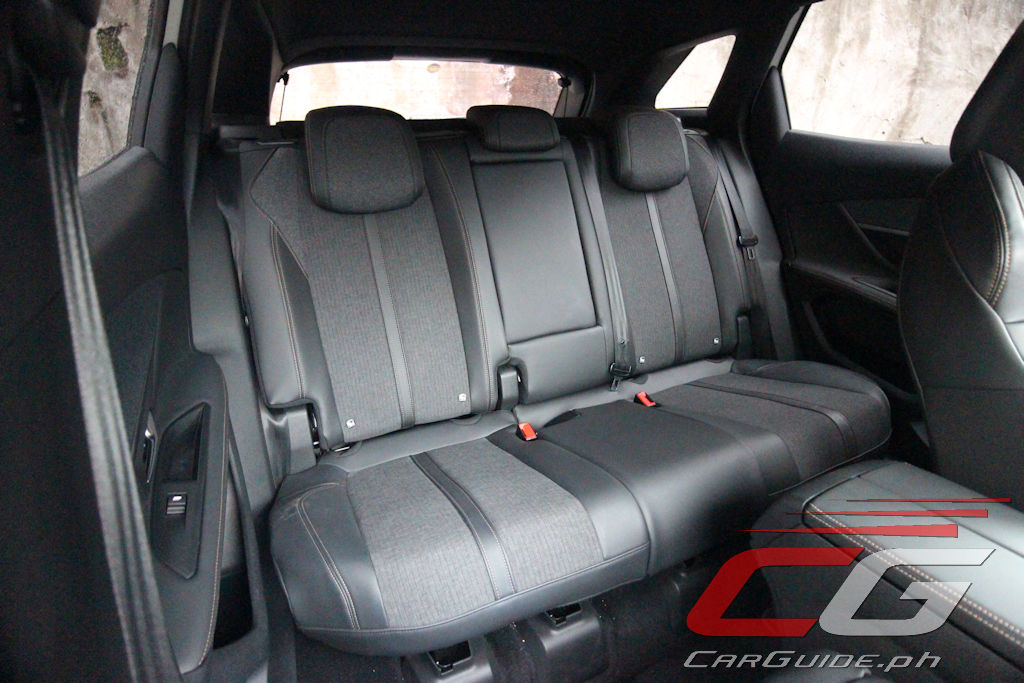